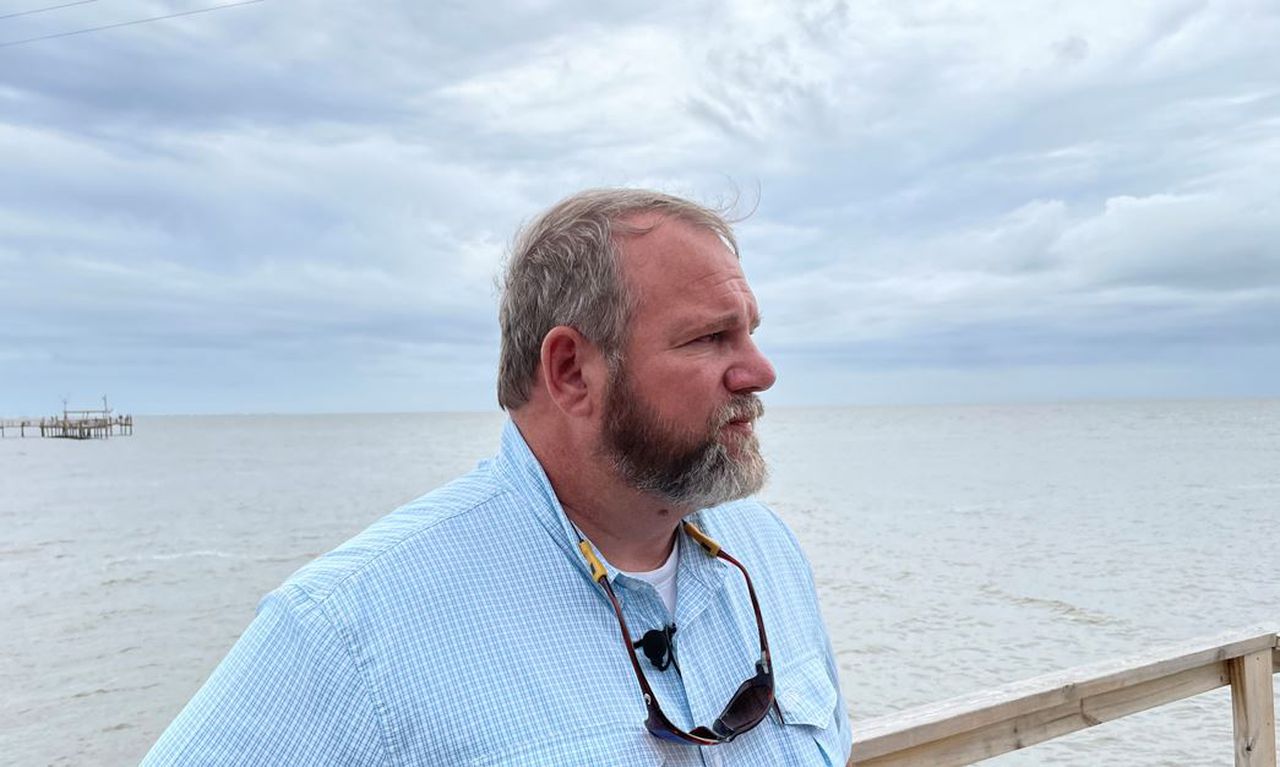 Richard Robertson was 43 years old when he was dragged from his jail cell by an angry white mob, shot and hung from an oak tree near the city’s police station.

But it’s Robertson’s alleged involvement in the shooting death of a white sheriff’s deputy that is sparking a debate in Mobile more than 113 years since it happened.

The current debate centers over the placement of a historic marker memorializing Robertson’s lynching. Twice in the past six months, the marker’s placement has been the subject of a dispute between its supporters and Mobile Mayor Sandy Stimpson’s office over its location.

The latest controversy involves both the location and Robertson’s involvement in the shooting of a Mobile County Sheriff’s deputy in 1909.

Mobile County Commissioners Randall Dueitt and Connie Hudson, in separate letters to Stimpson, objected to placing the marker on a piece of city right-of-way adjacent to the main entrance to the county-owned Government Plaza in downtown Mobile. Dueitt said his objection was related to Robertson’s story.

Related story: Lynching marker unveiled, and then removed in Mobile

“Our goal all along is to tell the story of Richard Robertson,” said the Rev. Rebekah Abel Lamar, senior pastor of Government Street Presbyterian Church in downtown Mobile, and a member of the Mobile County Community Remembrance Project Coalition’s working group that is studying Robertson’s past.

“Whenever the story becomes something else, it’s disappointing,” she added.

Dueitt, in a July 1 letter to the mayor, said he does not support a historic marker appearing anywhere in the city memorializing Robertson.

He said his opposition is due to historic accounts about Robertson connected to the slaying of a sheriff’s deputy.

“It is my strong belief that regardless of circumstances surrounding the death of Mr. Robertson, no one should be honored for taking the life of a law enforcement officer,” said Dueitt, a retired law enforcement officer. “I want to be clear that I do not condone in any way the circumstances surrounding the death of Mr. Robertson but with my past employment as a sworn law enforcement with the City of Mobile and the Mobile County Sheriff’s Department, I cannot support the placement of this marker for Mr. Robertson at any location, including the entrance of Government Plaza.”

Hudson, in her letter to the mayor, said she disagreed with placing the marker near the entrance to Government Plaza. She said the marker’s site is a few yards from the building’s main entrance and is “inappropriate for any type of vertical structure on the pathway into the building.”

Hudson, in an interview with AL.com on Friday, also said she was concerned with Robertson’s story, saying she was unaware about the allegations that Robertson shot a sheriff’s deputy until it was mentioned by Dueitt.

“A sheriff’s deputy life was lost,” said Hudson. “I don’t know the circumstances of (what occurred) and those probably went with the individuals (involved in the shooting) to their graves. But that cloud of suspicion was there.”

Commissioner Merceria Ludgood, the county commission’s only Black member and a representative of the Remembrance Project, in a letter to Stimpson, said that Robertson, a Black man, was never “tried or convicted” on charges of killing a deputy.

“If we believe in the rule of law, then we must acknowledge that, like all of us who claim the United States of America as home, we are ‘innocent until proven guilty,’ including Richard Robertson,” said Ludgood. “He never got his day in court because a mob intervened and made themselves judge, jury and executioner.”

The concerns about Robertson’s background comes as lynching stories in the U.S. — inspired by the popularity and interest in the Equal Justice Initiative’s National Memorial for Peace and Justice in Montgomery — are receiving more awareness.

At least one story is making national news in recent weeks following the discovery inside a Mississippi courthouse of an unserved arrest warrant against of a woman accused of kidnapping 14-year-old Emmett Till in 1955. Till was tortured and killed during a lynching in which two white men were tried and acquitted just weeks after the teenager’s body was discovered.

Evidence indicates the woman — Carolyn Bryant Donham, who is now in her 80s and believed to be living in North Carolina — identified Till to the men who later killed him. But the arrest warrant was not served to her in the 1950s as authorities claimed they did not want to “bother” Donham since she had young children to care for.

In the Robertson case, Lamar said, “our group has always known that Richard Robertson has a complicated story. However, he was denied a fair trial. It was an unjust murder by a mob that entered the jail without resistance to police and that is what we want to be remembering.”

Derryn Moten, chairman of the Department of History and Political Science at Alabama State University, said under “normal circumstance” people “would agree that someone who kills a police officer should not be celebrated.”

But Moten said race relations in that era were “anything but normal.”

“I think the focus should be on the form of punishment for Robinson, and typical of those times, a Black person who killed a white person, regardless of whether it was self-defense, was punished by whites severely and swiftly,” Moten said. “The mentality was that Blacks who killed whites had to be made an example of. Such thinking was often used to justify mob violence and mob vengeance. Mobs did not want to leave these matters to the courts where — although highly unlikely — a Black defendant might escape harsh punishment.”

Moten said he was unfamiliar with Robertson’s story, acknowledging that there is uncertainty on whether might have acted in self-defense.

What is known is that Robertson was arrested and jailed in January 1909, for allegedly shooting and killing Deputy Philip Fatch.

The altercation occurred after two deputies, including Fatch, arrived at Robertson’s home to arrest him on a warrant for assault.

Robertson, a carpenter working on a home in downtown Mobile, had been accused by two white plumbers – also working on the same home – of assault. No details exist on what the assault was about, and no investigation by authorities had occurred before the warrant was issued.

Robertson fled the deputies, and all three exchanged gunfire. Robertson was shot and transported to jail.

After Fatch died, rumors circulated that Robertson would be lynched. Indeed, he was – in a brutal killing in which a white mob dragged him away as he begged for mercy.

According to one newspaper account, the Alabama Gov. B.B. Comer was “asked by the citizens of Mobile” to investigate whether the Mobile County sheriff at the time “did his full duty” to prevent the lynching from happening.

No one was ever prosecuted in Robertson’s death.

‘You have to plan for that’

The marker is part of a project backed by the EJI, which is partnering with the Remembrance Project coalition to tell the stories of six victims of racial terror in Mobile from 1877-1950.

Similar markers have been erected throughout the United States, including in Alabama where they have been installed near county courthouses in Opelika, Bay Minette, and Hayneville. Other markers, according to EJI’s website, in Birmingham, Selma, Tuscaloosa, Gadsden, Irondale, Letohatchee, Montevallo, Fort Deposit, and Brighton.

The Robertson marker has long been expected to be the first of the markers displayed in Mobile County, though plans are underway to commemorate other lynching victims: Zacharia Graham (1891), Richard Robinson and Will Thompson (1906), Mose Dorsett (1907), and James Lewis (1919).

Karlos Finley, who is also a Remembrance Project member who chairs the Robertson working group, said the timeline for unveiling the future markers depends on guidelines established by EJI. He said the goal was to get the Robertson marker in the ground first, before proceeding with the others.

The process has been anything but smooth. Remembrance Project members said the group received permission from Stimpson’s office on two separate occasions to have the marker displayed – at the Semmes statue site in January, and the Government Street location earlier this spring.

Related story: How a once visible Alabama Confederate statue is now displayed ‘among hundreds’ of objects

Twice, the mayor’s office has rescinded the approval over concerns about location. Both moves were made days before the Remembrance Project was scheduling ceremonies to commemorate the marker’s unveiling.

The marker was supposed to be unveiled during a ceremony today at the Government Street location.

Stimpson, in a letter Thursday to Ludgood, cited the recent “strong opposition” from Dueitt and Hudson for his decision to have the marker temporarily moved to an alternate site along Church Street adjacent to Mardi Gras Park. Stimpson, in his letter, said he felt that was a site closer to where the lynching occurred.

Stimpson said the current landing spot for the marker, which is currently covered up, is “only intended to be temporary.” He said when a location “more suitable to the Remembrance Project’s goals is agreed upon, we will gladly relocate” it.

Ludgood, in January, said she believed the exact location of Robertson’s lynching is likely ‘in the middle of I-10,’ which means pinpointing an exact spot for a marker would be impossible.

Stimpson said his office has been in contact with Ludgood, and not the rest of the Remembrance Project, regarding the marker’s location.

Finley, president of the Dora Franklin Finley African-American Heritage Trail, said he did not believe his involvement in the project created political backlash. Finley ran against Stimpson in last year’s mayoral election.

Finley said he has been involved past historic marker projects.

“There are geographical factors that have to be considered, weather has to be considered,” Finley said. “There is a lot that goes into placing a marker and scheduling an unveiling. Those are things that some may not consider. (People) think you just drop it into the ground. But in order to commemorate these people, their contributions, or the things they endured, you have to plan for that.”

Stimpson said he felt it was unfortunate that Hudson and Dueitt’s objections to the Government Street site were not “made clear to use earlier in the process.”

A spokesperson for Stimpson said that the mayor “has and continues to support the work the Remembrance Project is doing to highlight victims of lynching in our community.”

Hudson said she feels the Remembrance Project did not consider that the Government Street site was county property, and that the location was opposed by two of the three commissioners.

“There is a movement to disregard our opposition and to put it there anyway,” Hudson said. “It’s county property and we maintain it. It’s our hardscape out there. Legally, yes, it’s city right-of-way. But usually there is a regard for the feelings of the property owner for a situation like this.”